FOLSOM, CA – Paramedics say an 11-year-old boy who stopped breathing during a swim team practice apparently suffered no long-term brain damage thanks to quick action by coaches and team parents.

“I just glanced up and saw Ian flop back into the pool,” Miller said.

Miller, a local attorney and former state lifeguard, said it quickly became clear Ian was in trouble. Miller and another team parent, an off-duty doctor, began chest compressions while others called 911.

“It happened too fast to really be scared,” said Folsom lifeguard Johan Krig, who said it was the first life-and-death emergency he’d seen in five years of summer work. ”Your training just kicks in.”

Firefighters and paramedics from both Folsom and El Dorado Hills arrived within minutes and administered epinephrine and two jolts from a defibrillator to restore Ian’s heartbeat.

Although Ian didn’t open his eyes until the third day at Sutter Memorial Hospital, his father said he soon was able to recite the characters and plot lines from the Harry Potter book series.

“His brain is fully intact. He’s fully functional today and it’s because of that early CPR,” Ferlini said.

Ian’s mother, Joanne, said doctors are still trying to determine exactly what led to the cardiac arrest, but have implanted a device aimed at preventing a recurrence.

Ian said he remembers nothing of the incident. 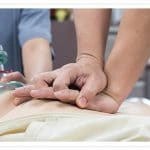 How to become an AHA InstructorACLS, Sacramento